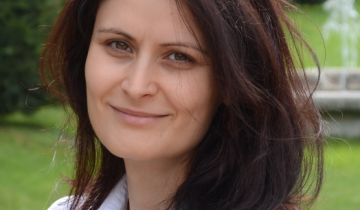 Abstract: An increasing number of people of all ages now use IT for various activities. This presents an opportunity to include recent technology — such as motion sensing input devices — in the design of home-based tele-rehabilitation tools.
In ongoing work, we have started to design an (artificially) intelligent physiotherapist integrated into a virtual reality platform.  This physiotherapist aims to provide automated feedback on how well video game exercises (called exergames) have been executed during a rehabilitation session.
In this talk, I will focus on the challenge of determining human action correctness, starting from 3D skeleton data captured by motion sensing devices.  I will discuss the applicability of a number of machine learning methods to this problem, particularly convolutional neural networks (CNNs), long short-term memory (LSTM) neural networks, and a technique based on rough path theory to extract path signatures from gesture data.

Bio: Crina Grosan is a Senior Lecturer in the Department of Computer Science at Brunel University London. Previously, she was a Lecturer and a Research Fellow in the same department and before that an academic staff member at Babes-Bolyai University Cluj-Napoca, one of the top universities in Romania. Crina received a BSc in Mathematics and Computer Science, an MSc in Convex Analysis and Optimisation and a PhD in Artificial Intelligence, all from Babes-Bolyai University. Her research interests span the areas of artificial intelligence, machine learning and optimisation. They include both theoretical and algorithmic development as well as applications for particular classes of problems
such as classification, clustering, prediction, estimation, decision-making, pattern finding, data mining, very large systems of nonlinear equations and large-scale optimisation. Crina has secured funding for her research through various grants from the EU, Research Council UK and the National Authority for Scientific Research in Romania.