Guest Talk: Edward Lank from the University of Waterloo 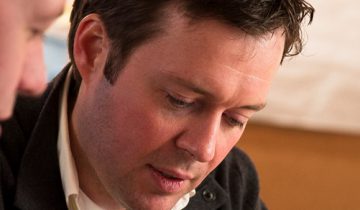 Abstract: Modern personal computing devices – tablets, smartphones, smartwatches, fitness trackers, remote controls – represent an ever-more-pervasive component of everyday life. Alongside this trend toward an increase in computing that you bring with you, we also continually encounter devices that exist both in tangible spaces and in the electronic domain. While this computationally augmented reality exists around us, interactions with this embedded, encountered computation rarely achieves the fluidity that one would desire. As a simple example, consider connecting your laptop or smartphone to a data projector. It almost always works well … except when it does not.

In this talk, I will detail some of our early work leveraging personal devices as computational proxies to control and manipulate external computation. Motivated by our early work on motion gestures for smartphone input, I will describe on-going research projects leveraging commodity smartwatches as proxies to support WIMP-style input, text input, and rich gestural input to external computation.  Because this work lies in the domain of free-space gestural input, I will also discuss our work on enhancing both the reliability and the perceived reliability of gesture recognition for end-users.  I will conclude by outlining our emerging vision of wearables and personal devices as a platform for the rich, subtle, and transient interactions necessary in an ever-more ubicomp-based reality.

Bio: Edward Lank is a faculty member in the David R. Cheriton School of Computer Science at the University of Waterloo where, effectively July 1st, he will hold the rank of Professor. Edward joined Waterloo in 2006.  With Michael Terry, he co-founded the Waterloo Human-Computer Interaction Lab, a lab he continues to co-direct.  Prior to joining the faculty at Waterloo, Edward was an Assistant Professor at San Francisco State University, a Post-Doctoral Intern at Xerox’s Palo Alto Research Centre, the Chief Technical Officer of MediaShell Corporation, and a sessional lecturer at Queen’s University.  Edward Lank received his Bachelor of Science Degree (Honours Physics) from the University of Prince Edward Island in 1994 and a Ph.D. in Computer Science from Queen’s University in 2001.  Edward’s current research interests are varied, and include intelligent user interfaces, surface and free-space gestural input, sketch and drawing interfaces, usable privacy and security, and other aspects of interactive system design.